A nasal septum deviation happens when the wall between your nasal passages (known as nasal septum) is displaced to one side. When this is off-centred (otherwise known as ‘deviated’), it will result in one nasal passage to be smaller in size than the other.

What causes a Deviated Septum?

A nasal deviated septum is caused by the displacement of the nasal septum in the nose. This displacement can happen due to injury, or as in many cases, simply from birth. However, it should be noted that having a deviated septum is very common. Research from American Academy of Otolaryngology – Head and Neck Surgery shows that 80% of people have septum that are deviated to a certain degree.

Contact sports that have a high risk of trauma to the face such as competitive fighting, rugby and ice-hockey can result in injury to the nose and as a result, displace the septum within the nose. Other sources of injury include falling and vehicle-related accidents.

Living with a Deviated Septum

People with slight septum deviation rarely have symptoms and might be unaware of the uneven nasal passages he/she might have. Symptoms such as breathing difficulties will only occur more frequently in increasingly severe cases of septum deviation.

The afflicted person can have difficulty breathing through the nose and might have to rely on using the mouth to breathe more often. They might also find that it is easier to breathe through one side of the nose. Other symptoms experienced include an increased risk of sinus infections or sinusitis, leading to nasal congestion and obstruction.

Additionally, a deviated septum may even be associated with nasal obstruction conditions like obstructive sleep apnea.

In some cases, the turbulent airflow generated by a deviated septum can cause dryness in one nostril. This can cause crusting around the septum, which may lead to nose bleeds (epistaxis).

In some rare cases, a deviated nasal septum may also result in headaches (Sluder’s neuralgia).

In severe cases, facial pain can be experienced.

It is recommended to visit your doctor or ENT specialist to seek medical advice if you have breathing difficulties or frequently encounter the above symptoms and feel it affects your quality of life.

How is a Deviated Septum diagnosed?

In most cases, there is no necessity for treatment or need to seek medical advice as it presents little to no problems to daily life. However, should you feel that your quality of life is affected, seeking a professional opinion from a doctor or ENT Specialist may be the best way.

The process for diagnosis involves an examination of your nostrils. The doctor uses a nasal speculum to check the placement of the septum within the nose. The focus is on how the septum’s current position affects the size your nostrils and nasal passages.

The doctor will also ask questions about symptoms experienced, like quality of sleep and snoring, frequency and degree of sinus problems and difficulty breathing.

How is a Deviated Septum treated?

Often, surgical treatment is not required. Symptoms can be managed through medication meant to improve the quality of life in most people with a deviated septum. Common medications include decongestants, antihistamines, nasal steroid sprays and nasal strips.

Should the symptoms not improve with usage of medication or other attempts at treating them, your doctor or Ear, Nose and Throat (ENT) specialist may suggest a type of reconstructive surgery for your nose and deviated septum known as Septoplasty.

What is Deviated Septum Surgery (Septoplasty)?

Septoplasty is a surgical correction of the deviated septum and is usually performed under general anaesthesia. The correction has to be performed with extreme precision to avoid affecting the support structure of the nose. Otherwise, rare complications such as saddle nose deformity can occur. Generally, most patients will do well after surgery with minimal problems. It is a straightforward Day Surgery procedure.

During this surgery, the surgeon cuts the septum and removes excess cartilage and/or bone. This process straightens the passages in the nose and septum. The incision is then closed with sutures.

It is advised to avoid medication such as aspirin or ibuprofen for 2 weeks before and after surgery as such drugs may increase the risk of bleeding. If you have a smoking habit, it is highly encouraged for you to quit smoking during this period of time as it may hamper the healing process. 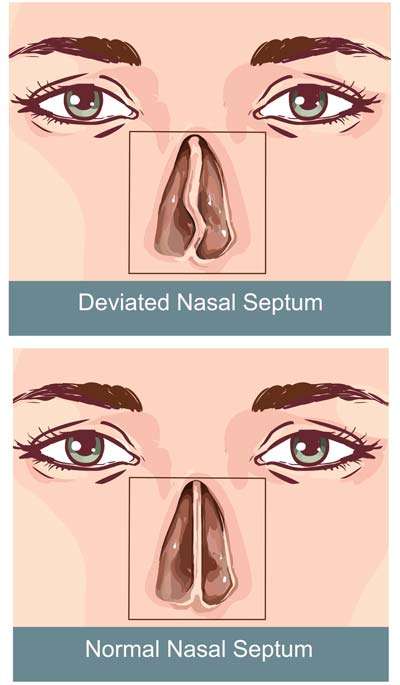 Ask Us if you have any question?

Feel free to drop us a message if you have concerns or symptoms pertaining to Deviated Nasal Septum.